As you know, Twitter recently changed their “look” and while the new, improved layout has a larger interface area, that in turn means a much smaller sidebar area for your branding message. 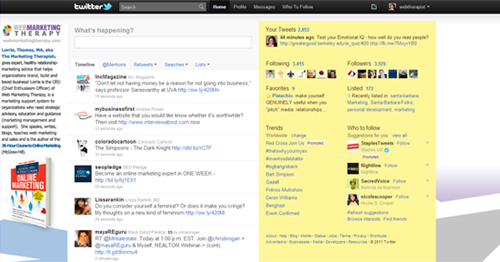 Creating a custom background has become more of an ART rather than a SCIENCE since a serious judgment call needs to be made as to what size to make your background message. If you make it viewable to everyone, it becomes virtually worthless because it’s so narrow. The next size up can look oddly narrow in many browsers but be functional and the reverse is true if you try to accommodate the design for very wide screens.

The safest bet is to design your background for the 1280px screens, but if your viewers are more likely to have newer computers, you may want to consider the 1440px option since the message will have more impact.

If you opt for the 1440px format, keep it simple, don’t include large amounts of text and make sure to tweet your urls and phone number to ensure that all your twitter users have a chance of seeing it, instead of just the users visiting your full size profile page.

So, if your current Twitter account has a branded background design built to fit a 1280px or 1440px screen for the old Twitter, it may be time for a healthy update.